When I was in high school I became fascinated with the Robo-One robot competitions going on in Japan. I decided I really wanted to make my own and my mom kindly bought me a set of servos I picked out for this purpose. Above you can see my initial attempt where I cut out and formed brackets out of thin sheets of aluminum. The robot had no programmed motions and required me to select a servo on the controller then individually move it clockwise or counter-clockwise. I took this robot to a robotics conference in Miami just for fun and to check out other robots. One issue I ran into was that the aluminum was to flexible and caused the robot to jitter when it moved. Later I ran across a large superman action figure and decided it would make the perfect shell.

I nicknamed this version “Supe”  and managed to finish outfitting Supe’s torso and arms and embedded a servo controller and wireless receiver inside. 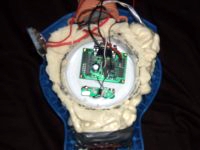 I then wrote a simple program on my computer that allowed me to record and then transmit a sequence of servo positions. I used this to record a simple music video of him dancing to a variety of different songs which I then put on an old website of mine. Unfortunately, this video has been lost.